Billie Eilish has been exercising her free speech rights regarding the death of George Floyd, the unarmed African-American man who died after a white police officer pinned him to the ground with a knee into his neck on May 25.

And now the pop star, 18, is calling out President Donald Trump for his tweets about Thursday night’s protests in Minneapolis, Minnesota.

‘Are you dead f***ing serius????’ she wrote on her Instagram Stories along with a screenshot of a particular tweet the President posted Thursday night

When the President posted his message on Twitter, the protests in Minneapolis had escalated to the point where some protestors set MPD’s 3rd Precinct building on fire, which forced personnel to evacuate the area.

‘I can’t stand back & watch this happen to a great American City, Minneapolis. A total lack of leadership,’ he wrote in a reference to Minneapolis Mayor Jacob Frey.

‘Either the very weak Radical Left Mayor, Jacob Frey, get his act together and bring the City under control, or I will send in the National Guard & get the job done right.’

Mr. Trump then directed his tough talk towards the protestors.

‘These THUGS are dishonoring the memory of George Floyd, and I won’t let that happen. Just spoke to Governor Tim Walz and told him that the Military is with him all the way.’

He ended the tweet by promising to take action, writing, ‘Any difficulty and we will assume control but, when the looting starts, the shooting starts. Thank you!’

The second part of the tweet that began with ‘These THUGS’ was flagged by Twitter for ‘glorifying violence’ and was subsequently hidden in President Trump’s feed, according to CNN.

Some people also took his use of the phrase ‘when the looting starts, the shooting starts’ as a threat.

Hearing the criticism, the President tried to clarify his tweet on Friday, insisting that his words were not a threat.

‘Looting leads to shooting, and that’s why a man was shot and killed in Minneapolis on Wednesday night – or look at what just happened in Louisville with 7 people shot. I don’t want this to happen, and that’s what the expression put out last night means,’ he explained.

‘It was spoken as a fact, not as a statement. It’s very simple, nobody should have any problem with this other than the haters, and those looking to cause trouble on social media. Honor the memory of George Floyd.’

As seen in several videos, Officer Derek Chauvin kneeled on Floyd’s neck for a total of eight minutes and 46 seconds, as three other police officers looked on. They were all fired from the police department the following day.

On Friday, four days after Floyd’s fatal arrest, Chauvin was charged with third-degree murder and manslaughter.

Only For You Diletta Leotta! Can Yaman BLOCKS Demet Özdemir’s Name on Instagram 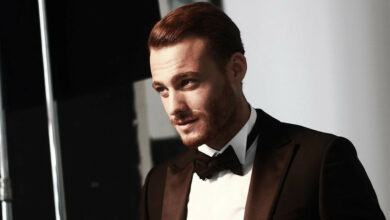 Can Yaman Is Back To the Topless Game .. the Best Way To Say Goodbye To Summer! (Picture)