President Joe Biden warned Russian President Vladimir Putin on Tuesday that the US and its allies would take “strong measures to respond to an attack on Ukraine, as tensions surge over Moscow’s massing of troops on the border of the Eastern European nation.

In addition, Biden told Putin that the US would “provide additional defensive material to the Ukrainians, above and beyond that which we are already providing if Russia attacks, Sullivan said.

Putin pushed back against Biden’s warnings over a Russian threat to Ukraine, blaming NATO for the increase in tensions through its “dangerous efforts to expand into Ukraine and ratchet up its military potential on Russia’s borders, the Kremlin said in a statement.

The Russian leader reiterated that Moscow wants binding security guarantees that the US-led alliance won’t take in new members to the east or station offensive weapons close to Russia.

Putin also criticized the steady escalation of measures that have severely cut back Russia’s diplomatic presence in the US in recent years, forcing it to retaliate.

While noting that the two countries agreed to hold dialogue on their security disagreements, the Kremlin described the phone talk as “frank and businesslike.

The call between the two leaders followed a spike in tensions due to the buildup of more than 100,000 Russian troops on Ukraine’s border. US intelligence suggests Russia has drafted a plan for a military offensive against Ukraine as soon as early 2022 involving as many as 175,000 personnel along with armor, artillery and other equipment.

Sullivan said the US doesn’t believe that Putin has made a decision about attacking Ukraine. Russian officials have repeatedly rejected accusations that they are planning for war.

While a White House statement and Sullivan didn’t mention plans for a future in-person summit, the White House added that “the two presidents tasked their teams to follow up, and the US will do so in close coordination with allies and partners.

Biden now plans to call the leaders of France, Italy, the UK and Germany to brief them on the conversations, the White House said. He’s expected to speak with Ukrainian President Volodymyr Zelenskiy on Thursday, Sullivan said.

The call on Tuesday was the fourth direct conversation between the leaders this year, including an in-person summit in Geneva.

Among the potential US options, if Russia invades Ukraine, is pressing Germany to agree to stop the contested Nord Stream 2 gas pipeline, according to documents seen by Bloomberg and people familiar with the plans.

The Kremlin says it doesn’t intend to invade and accuses the US and its allies of expanding their military infrastructure into Ukraine in a way that Russia sees as threatening.

Before the talks, Kremlin spokesman Dmitry Peskov declined to comment on the reports of planned sanctions, saying the “emotional statements of recent days wouldn’t affect the talks.

“It’s obvious that if the presidents are having this conversation, they intend to discuss the issues and not drive things into a dead end, Peskov said on a conference call with reporters Tuesday, while warning against expecting breakthroughs.

If there is an attack on Ukraine, US and European allies are also weighing penalties that would target Russia’s largest banks and the country’s ability to convert rubles into foreign currencies, including the dollar.

In a briefing Monday on Capitol Hill, US Under Secretary of State Victoria Nuland faced push-back from senators who said the US was limiting its options to deter an invasion by not providing more weaponry to Ukraine and failing to stop the Nord Stream 2 pipeline.

While Russian officials have rejected suggestions that they are seeking to stoke a conflict, Putin has made clear that he views Western military support for Ukraine — especially the possibility of greater integration with the NATO alliance — as a “red line. And Russian officials have accused the government in Kyiv of planning to attack Russia-backed separatists that Russia supports in Ukraine’s eastern Donbas region. Ukraine rejects those charges.

Before the call, the Kremlin said Putin would push his proposal for legally binding security guarantees that NATO wouldn’t expand further eastward and wouldn’t deploy offensive weapons in the region. White House Press Secretary Jen Psaki has said that Putin has no say in NATO’s membership.

Biden was expected to tell Putin that there would be benefits for Russia if he decides against military action and instead pursues diplomacy, according to the senior US official. The US president also planned to press Putin on separate issues, including assistance reviving the 2015 nuclear deal with Iran and continued cyberattacks originating from Russia.

The tensions between the US and Russia were evident in Stockholm last week, when Secretary of State Antony Blinken and his Russian counterpart, Foreign Minister Sergei Lavrov, got into a testy exchange at a private dinner with dozens of other officials over each side’s interpretation of who was to blame over the current state of affairs in Ukraine. 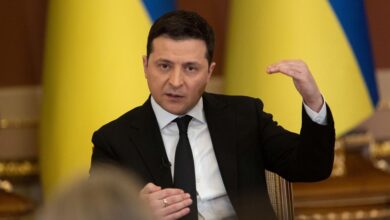