US President Joe Biden told his French counterpart Emmanuel Macron Friday that his country was “clumsy” in securing a submarines deal with Australia behind France’s back.

“We have no better ally than France,” Biden said in the first meeting with Macron since the row erupted last month.

“What happened was, to use an English phrase, what we did was clumsy, it was not done with a lot of grace,” Biden told journalists after the meeting in Rome ahead of a weekend G20 summit.

“I was under the impression that France had been informed long before, that the (French) deal was not going through,” he said.

Biden called France an “extremely, extremely valued partner… and a power in itself” with the “same values” as the United States.

A diplomatic row erupted last month after Australia pulled out of a multibillion-dollar submarines deal with France in favor of an alternative one with the United States and Britain.

An enraged French government called secret talks leading up to the cancellation “a stab in the back”, and Macron recalled his ambassadors from Washington and Canberra.

Australia announced the subs pact as it joined a new alliance with Britain and the United States, dubbed AUKUS, one of a series of initiatives by Biden who views countering China as the paramount concern of the United States. 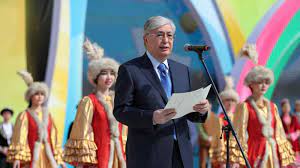 Kazakhs back sweeping reforms to move past Nazarbayev era