Beaches that were forced to close under coronavirus lockdown measures are beginning to reopen to sunbathers in some U.S. states, with beaches in Florida and South Carolina lifting the restrictions despite advice from health officials.

‘It felt like it was Christmas morning with everybody enjoying something different,’ Ritchie said, adding he would take daily walks on the beach with his wife, Susan. ‘We’ve been cooped up for so long and staying out of people’s way, it’s just a pleasure to be out in the sun.’

Most people on the beach obeyed the social distancing measure that are place to keep groups to a minimum and for people to keep a safe distance from one another to limit further spread of the virus.

However according to Myrtle Beach Online, larger groups of teens were seen grouped together with up to 20 others near Garden City Pier, violating the Governor’s three people-to-a-group rule.

Murrells Inlet teen Alec Arditi told the news outlet that he was happy to see the beaches open, and that he didn’t consider it to be an issue to gather with his friends.

‘I definitely will take precautions but obviously it doesn’t look like it but I do, I’m definitely concerned about the coronavirus but I wouldn’t over stress like most people,’ Arditi said. ‘At the end of the day what’s gonna happen is gonna happen.’

Some people going to the beach at Garden City did share concerns after seeing the larger groups of teenagers gathering throughout the day, fearing beaches could be shut down once again because of their refusal to follow to the restrictions.

‘This is a prime example of what’s going to ruin it for everybody,’ Surfside Beach resident John Sully told Myrtle Beach Online. ‘When they’re young they think they’re made out of teflon and these are the chances they take.’

This gave local jurisdictions the authority to enforce their own beach rules.

Beach-goers hit the sands as early as 10 a.m. despite the new rules going into effect at midday, showing people’s eagerness to get back on the sand.

Police continued to patrol the beach to enforce the restrictions still in place and city workers removed all police tape and barricades that had been set up to prevent people from entering the beach.

Despite what public health officials have said about the risk of the virus continuing to spread if restrictions are lifted too early, officials said reopening the beach accesses is an appropriate measure.

‘We’re putting a lot of confidence in the people of our community but we have a lot of smart people and they’ve done a very good job so far and I’m trusting that they will listen and continue doing the good job that they have done,’ Mayor Marilyn Garden City said.

Cocoa Beach and Satellite beach on Florida’s east coast have also now lifted most restrictions, allowing sunbathing, sitting in chairs and all other activities within city limits so long as groups are kept to five or less.

According to Floridatoday.com beach-goers were limited to walking, jogging, biking, fishing, surfing and swimming since April 2 under the state’s 30-day ‘safer at home’ initiative.

‘The City would like to thank our community for continuing to abide by the social distancing measures we have put in place at our beaches to safeguard our residents during this pandemic response,’ Satellite Beach City Manager Courtney Barker wrote Facebook post on Tuesday afternoon

‘Since these measures have been put in place, the beaches have been areas of strong compliance, while still giving our residents a place to exercise and relax,’ Barker wrote.

‘As such, the City is now allowing all beach activities to take place, including sunbathing and sitting on the beach. However, we will be limiting activities on the beach to groups of five or less, and we will continue to limit any congregating on the boardwalks,’ she added.

People at the beaches will also have to keep a distance of six feet from others.

Some social distancing measures will still apply in the county on its 35 miles of beaches.

Lido Beach, however, which is under the city of Sarasota’s jurisdiction will remain closed, as will beach in neighboring Manatee Country.

Permissible activities in Sarasota County will include running, walking, biking, swimming and surfing when they reopen at 6 a.m. on Monday.

Groups will be required to limit their numbers, while people will also need to remain six feet apart from each other.  Sunbathing is yet to be permitted.

‘Let’s not jump and go crazy when we open these up; I don’t expect to see a drum circle on Sunday,’ Commissioner Christian Ziegler told WWSB ABC7.

There was uproar on social media when beaches in the Jacksonville area of Florida reopened on Friday at 5pm under limited hours and use restrictions, even as Florida recorded its highest single-day increase in confirmed coronavirus cases.

Photos and video from the scene show enthusiastic residents cheering as they ran out onto the sand after weeks of closures, causing the Twitter hashtag #FloridaMorons to trend on the website.

It was announced that Jacksonville’s beaches will be open daily from 6am to 11am and 5pm to 8pm for exercise such as walking and swimming only. Banned are sunbathing, chairs, towels, or loitering on the shore, and beachgoers are required to remain six feet apart.

According to the New York Times, Florida has had a total of 28,301 confirmed cases of the coronavirus, with 926 deaths resulting from the disease.

South Carolina has had 4,761 total confirmed cases with 140 deaths resulting from Covid-19. 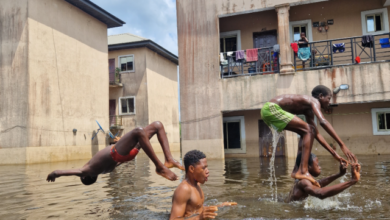 Nigeria floods: Songs and testimonies from a drowning world

Libya Turns The Page on a Decade of Violence Through Art