A triptych by British artist Banksy of the Mediterranean Sea depicting the European refugee crisis has sold for more than £2.2 million ($2.9 million) at auction in London.

The three-paneled work, “Mediterranean Sea View 2017,” was put up for sale at Sotheby’s auction house on July 29, where it was initially expected to fetch £1.2 million for a children’s hospital in the West Bank, the Bethlehem Arab Society for Rehabilitation.

The money raised will be put toward an acute stroke unit and children’s rehabilitation equipment.

The work was based on three romantic-period oil paintings of the sea, and depicted life jackets, oars and other detritus on the shore from abandoned refugee boats — a comment on the mass movement of people from the Middle East and North Africa to Europe due to a series of ongoing natural and man-made events, including the wars in Iraq, Syria and Libya.

“In ‘Mediterranean Sea View 2017,’ Banksy corrupts three found oil paintings with his own witty re-workings to create something that, while posing as a 19th-century seascape, spotlights one of the burning issues of the 21st century,” said Alex Branczik, Sotheby’s head of contemporary art for Europe.

“This triptych hangs in Sotheby’s galleries alongside works by some of history’s greatest landscape painters, including Bellotto, Van Goyen and Turner. Banksy’s work, however, stands alone for its potent political message.”

Banksy, who keeps his true identity a well-guarded secret, rose to international prominence on the back of graffiti art with strong themes of political and social commentary.

In recent years, the twin issues of the Mediterranean migration crisis and the Israel-Palestine conflict have played a major role in his work.

In 2015, he created an interactive work in the form of dystopian theme park “Dismaland,” in the British town of Weston-super-Mare, featuring refugee boats and anarchist themes.

He also opened the Walled-Off Hotel in Bethlehem in 2017, a play on the name of the famous Waldorf hotel chain.

The Walled-Off Hotel boasts the “worst view of any hotel in the world,” located next to Israel’s barrier wall in the West Bank.

Guests can experience just 25 minutes of direct sunlight per day. “Mediterranean Sea View 2017” had previously hung in the hotel.

In “The Son of a Migrant from Syria,” daubed on a wall in a French migrant camp dubbed “The Jungle” in the port of Calais in 2015, Banksy showed the deceased billionaire founder of tech giant Apple, Steve Jobs, as a refugee, carrying nothing but a sack of belongings and an early Apple computer. Jobs’s biological father Abdulfattah Jandali was from the Syrian city of Homs.

Banksy’s most recent work involved spraying a train carriage on the London Underground with messages about COVID-19.

Controversy was caused when it emerged that it was removed as part of routine cleaning by the network’s operator, Transport for London. 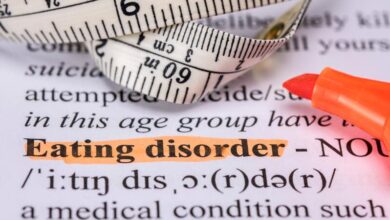 Eating Disorders: When Your Own Body Feels Like an Enemy

How Will The Law Protect Women Against Rape?