On June 6, portraits of Sahar Fares circulated widely once more on social media. With her long black hair and dazzling smile, she looked stunning in her evening gown. Fares should have been getting married that day, if she hadn’t perished in the Beirut Port explosion on the August 4, 2020. Called out with her fellow firefighters to extinguish the fire, she died on the port’s dock, having been caught in the explosion.

Ten months later, there have been no convictions and no culprits identified for the blast. Meanwhile, Fares’ fiancé continues to share photos and drawings of her on Instagram, keeping her memory alive.

In Paris, where she has been living since she was 18, Lamia Ziadé was intensely moved when she saw those pictures on her phone, as she had been by so many of the images of other victims.

The French-Lebanese author and illustrator published her book “Mon Port de Beyrouth” (My Port of Beirut) in April. In it, she looks back at the tragedy, combining text and drawings inspired by photos shared on social media or published in traditional media: memories and moments captured on the spot.

In January, putting the finishing touches to the book, she couldn’t help but add one last drawing: one of Sahar Fares celebrating her final birthday at the fire station. “I finished working on the book a few days ago,” she wrote on the final page. “But this morning, a short video made me cry. It was impossible not to add this last drawing.”

Fares became, for Ziadé, “the heart of the tragedy.”

“That girl is a movie character, a full-fledged heroine straight out of a novel,” Ziadé tells Arab News. “Hers was the first of the victims’ faces to be shared on social media. She was so beautiful, so full of life… During the six months I was working on the book, pictures of her kept coming through. It felt like I knew her. This wasn’t the case for the other victims — most of them having just one shot of them being shared on social media. That girl is the one who filmed the last video of what was going on right before the port explosion. She took the photo of the three men trying to open the doors leading inside the hangar. I don’t know what other character could have been as strong.”

In the introduction to the book, Ziadé said she had been unable to sleep properly since the explosion at the port, and was liable to burst into tears throughout the day. When she speaks to Arab News, it is apparent that the emotions raised by the blast remain raw today, if slightly less immediate.

“I no longer cry every day, the way I used to during the six months in which I wrote the book,” she tells us. “But I still follow the news every morning and the situation in Lebanon — the economic crisis and the political situation — is hitting hard. People are hungry, they get shot and thrown in jail when they protest. It’s terrible. I am still very worried about the situation and not very optimistic. One of my book’s last drawings depicts the light of the setting sun on the silos, as a symbol of the end of an era. It would take a miracle.”

When respected French daily Le Monde first contacted Ziadé the day after the explosion to ask if she would be interested in producing an article for their weekly magazine, she declined.

“I wasn’t ready. I wasn’t well at all,” she says. “I had no intention to write at all. I didn’t feel like I could do something on the spur of the moment. I felt so devastated.

“But the next day, I told myself that one could not just say no to 15 pages about Beirut in Le Monde,” she continues. “So I started drawing.”

Once the article was published, Ziadé’s editor suggested that the project should be expanded into a book. This was not a random proposal. As Ziadé explains, in all of her work, from her first book “Bye Bye Babylon,” her aim has been “to bear witness to Lebanon’s history. — whether I have lived it or not — and to keep a trace, shed light on unknown stories, dig in the archives.”

But “Mon Port de Beyrouth” was a little different, she explains: “My approach has always been about bearing witness, telling a story, but this was the first time I did that live, on the spot, as an event is unfolding. It was a quite difficult task because I didn’t have the necessary hindsight.”

The book is also, she says “quite personal.” Aside from the general research she did on the port, and the fact that her drawings are based on actual pictures, she also looked into her family history. The result is an intimate, revealing portrayal of events that at times feels like reading someone’s diary. “The fact that I worked on it while I myself was completely devastated (comes across) in the writing,” she says. “I was working 24/7. No distractions. No movies, no books, nothing that could take my mind off the tragedy for a fragment of time.

“Working on something tangible surely helped me,” she continues. “But, conversely, I was also immersed in this constantly. I couldn’t get away from it.”

Her desire is that the book will stand as “a testimonial, a tribute to all the victims and to Beirut itself.”

And while her earlier admission that she is “not optimistic” still stands, Ziadé does have hope for Lebanon and its people.
“Without hope, you stop living and watching the news,” she says. “There are people who no longer want to hear about what is going on. But I believe there is always the possibility of doing something.

“The reconstruction work is well underway,” she continues. “We will get through this.”

Shock Video: A Brit Throws a Punch at an African Woman on Board a Plane! 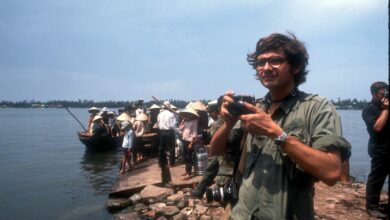