An Australian ambassador has been criticised after he shared a photograph online of him eating an endangered soft shell turtle in Cambodia.

Pablo Kang, Australia’s representative in Cambodia, was forced to issue a grovelling apology after posting the images of his meal to Twitter while visiting the nation.

The Asian giant softshell turtle is regarded as a ‘high status’ food and is now endangered because it is eaten by humans. 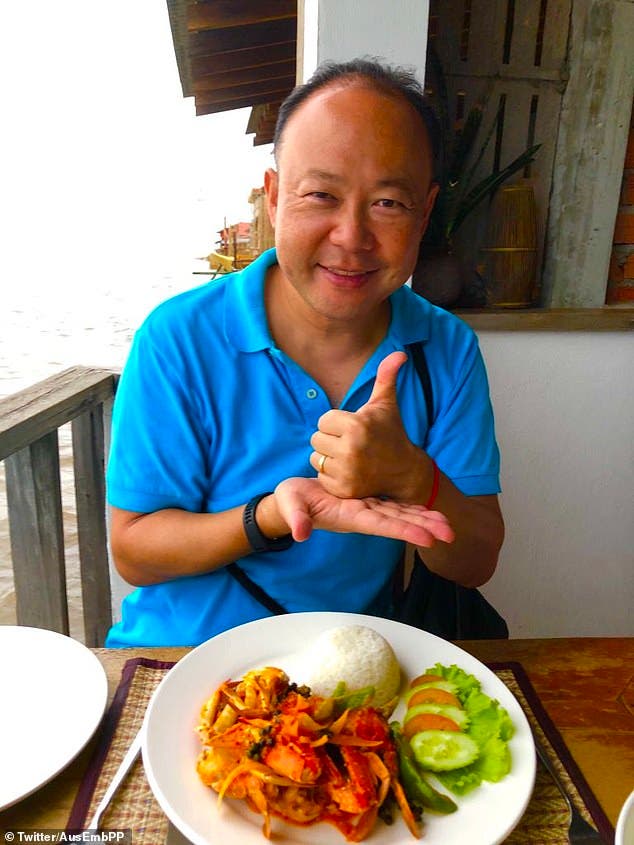 Mr Kang was forced to apologise for his tweet before deleting it after widespread backlash.

‘Hello. I have removed my tweet about soft shell turtles & eels, and apologise to all those who took offence,’ he wrote online.

‘My intent was not to promote these dishes, but to tell people about some of the foods I was offered during my recent provincial visit.’

Giant softshell turtles disappeared from most of their habitat last century.

Some scientists describe the species as endangered, while other say it is threatened, at the very least.

‘I certainly do not condone the harvesting of any endangered species for food or other purposes, and will be more careful about my actions in future,’ Mr Kang wrote.

Mr Kang’s actions drew criticism from environmentalists who expressed concern about the damage he could have caused.

‘All Softshell Turtle species in SE Asia are listed as at least vulnerable, while others are endangered,’ one person tweeted.

‘Consumption is the number 1 threat, and demand is in part due to perception that it is a ‘high-status’ food, all the more reckless for an Ambassador to promote!’

A wildlife account added: ‘Really? Promoting consumption of endangered species and therefore the illegal wildlife trade? Not responsible actions from an Ambassador.’

Mr Kang is an experienced diplomat.

Prior to holding his post with Cambodia, he worked as the ambassador to the United Arab Emirates, and the High Commissioner to Vanuatu for Australia.