The near-Earth object that was thought to smash into our planet in 2068 has been deemed no longer a threat for at least the next 100 years.

NASA made the announcement after asteroid Apophis passed by Earth earlier this month, allowing the American space agency to estimate the space rock’s orbit around the sun.

Scientists used a 230-foot-long radio antenna to track Apophis’ motion, revealing ‘a 2068 impact is not in the realm of possibility anymore.’

However, the asteroid is set to return in 2029, but the new data predicts it will pass some 20,000 miles from Earth – which is still said to be a safe distance.

Apophis, named after the ancient Egyptian god of chaose, is more than 1,000 feet wide and an impact would be equivalent to 880 million tons of trinitrotoluene (TNT) exploding all at once.

The asteroid was first discovered on June 19, 2004 by astronomers at the Kitt Peak National Observatory in Arizona.

Since then, scientists have been tracking its every move as it orbits the sun – which it completes less than one Earth year.

As Apophis swept passed Earth around March 5, scientists went to work collecting data to learn more about its path.

Davide Farnocchia of NASA’s Center for Near-Earth Object Studies (CNEOS), which is managed by NASA’s Jet Propulsion Laboratory in Southern California, said: ‘A 2068 impact is not in the realm of possibility anymore, and our calculations don’t show any impact risk for at least the next 100 years.’

‘A 2068 impact is not in the realm of possibility anymore, and our calculations don’t show any impact risk for at least the next 100 years.’

JPL scientist Marina Brozović, who led the radar campaign, said: ‘Although Apophis made a recent close approach with Earth, it was still nearly 10.6 million miles [17 million kilometers] away. Even so, we were able to acquire incredibly precise information about its distance to an accuracy of about 150 meters [490 feet].’

‘This campaign not only helped us rule out any impact risk, it set us up for a wonderful science opportunity.’

The radio antenna captured radar imagery of Apophis as it streak past Earth this month.

Although the images are pixelated, the resolution is 127 feet per pixel, which NASA deems it a ‘remarkable resolution.’

The asteroid was captured 44 times the Earth-moon distance which Brozović said if ‘we had binoculars as powerful as this radar, we would be able to sit in Los Angeles and read a dinner menu at a restaurant in New York.’

As the radar team further analyzes their data, they also hope to learn more about the asteroid’s shape. Previous radar observations have suggested that Apophis has a ‘bilobed,’ or peanutlike, appearance.

This is a relatively common shape among the near-Earth asteroids larger than 660 feet (200 meters) in diameter; at least one in six have two lobes.

The Apophis close approach in 2029 will be an incredible opportunity for science,’ said Brozović.

‘We’ll observe the asteroid with both optical and radar telescopes. With radar observations, we might be able to see surface details that are only a few meters in size.’

The asteroid is an ‘S-type’ or stony space rock, meaning it is made of silicate materials including a mix of nickel and iron, according to NASA.

‘Like all asteroids, Apophis is a remnant from the early formation of our solar system about 4.6 billion years ago,’ according to NASA.

‘It originated in the main asteroid belt between Mars and Jupiter. Over millions of years, its orbit was changed primarily by the gravitational influence of large planets like Jupiter so that it now orbits the Sun closer to Earth.’

There are no images of its surface, but NASA predicts it will be similar to the surface of other stony-type asteroids like Itokawa – this was the first asteroid where samples were captured and returned to Earth for analysis. 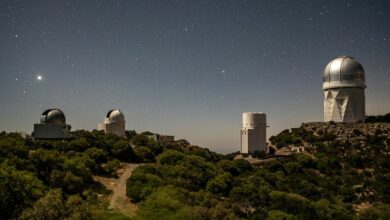 The research centre dedicated to the science of cracks

Can The Pfizer Covid Vaccine Quash The New Variant?