Shares across Asia declined on Tuesday, reversing gains from a day earlier after smartphone maker Apple Inc warned that it would not be able to meet sales targets for the quarter due to production delays caused by the coronavirus outbreak.

Japanese stocks slid to a two-week low as the benchmark Nikkei fell 1.2 percent by the midday break and the broader Topix dropped 1.2 percent.

In a statement late on Monday, Apple said that while work was starting to resume in China: “We are experiencing a slower return to normal conditions than we had anticipated.” Global iPhone supplies will be “temporarily constrained,” the company said.

Apple competitor Samsung Electronics launched smartphone delivery services for customers to test its new products, sources told the Reuters news agency, as the spread of the coronavirus has prompted the tech giant to cancel promotional events and brace for weak store sales.

Analysts say the virus may slash demand for smartphones by half in the first quarter in China, the world’s biggest market for the devices.

Chinese firms are most likely to see the effects in February, a vice chairman of the country’s state assets regulator said on Tuesday, as containment measures disrupt production and supply chains.

“(The outbreak) in turn had a comparatively controllable impact in January operations and a major impact in February,” Ren Hongbin of China’s state-owned Assets Supervision and Administration Commission (SASAC), told reporters during a press briefing, adding that consumer-oriented firms and firms at the end of industrial chains have been hit the hardest.

More than 95 percent of central government-controlled companies in key sectors such as oil, communication, power and transport are in operation, Ren said.

Airlines are also losing out, with Singapore Airlines saying it would temporarily cut flights across its global network in March, April and May due to weaker demand as a result of the coronavirus epidemic.

Destinations that are among those with reduced services include Los Angeles, Frankfurt, Paris, Tokyo, Seoul, Jakarta, Sydney and Mumbai, the airline said on its website on Tuesday.

The airline had already announced large cuts to flights to mainland China and Hong Kong.

She urged residents to accept the government’s quarantine plans for passengers returning from a cruise ship stranded in Japan.

Anger has been brewing over Lam’s handling of the crisis, with critics calling on her to shut the entire border with mainland China and some medical workers going on strike.

Lam has said a full closure of the border would be impractical, inappropriate and discriminatory.

Moon said the economy is in an emergency situation and requires a stimulus to lift domestic demand.

“(The government) shouldn’t quibble over whether anything is unprecedented or not, rather, we should take every possible measure we can think of on the table to deploy them,” Moon said in a cabinet meeting.

Moon’s comments could add pressure on the central bank to back government policies in the run-up to the April 15 general election, with severall analysts expecting a cut in interest rates.

The fast-spreading coronavirus has disrupted world supply chains and business activity in a blow to global growth and demand for South Korean goods. 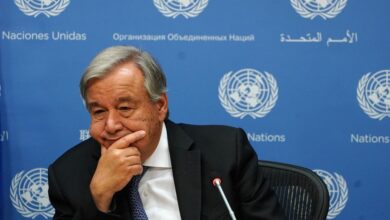