Ashley Graham and her husband Justin Ervin welcomed their first child on January 18.

And now the couple is sharing the first glimpse at their two-week-old baby boy with her 10.1 million Instagram followers.

The model, 32, gushed over their bundle of joy in a post on Monday, and hinted at  bigger reveal coming on Tuesday.

In two black and white photos, their baby, whose name has not yet been released, grasps his parents fingers with his hand.

The baby’s face is not show, but his little hand and part of his chest, covered in a button-up onsie are.

‘Meeting out son has made our heart incredibly full,’ Graham added.

Teasing a possible bigger and full introduction to the world she continued: ‘We can’t wait to introduce him to you on @prettybigdealpod tomorrow.’

Ashley has been hosting the podcast since October 2018 and new episodes are released on Tuesdays.

They first announced the birth of their son on January 20th with a message posted the the model’s Instagram story.

At the time she wrote: ‘At 6:00pm on Saturday our lives changed for the better,’ the cover girl began her note, adding a red heart. ‘Thank you for all your love and support during this incredible time.’

She and Justin announced in August on their nine year wedding anniversary that they were expecting their first child.

‘Nine years ago today, I married the love of my life. It has been the best journey with my favorite person in the world!’ she wrote in the caption of a video of herself and Ervin. Today, we are feeling so blessed, grateful and excited to celebrate with our GROWING FAMILY!’ wrote the bikini model.

One of her last social media posts from January 11 showed her in a bra top and leggings with her bare bump. She had 10M written on her tummy to celebrate having 10M Instagram followers.  She flashed her most infectious smile while making a heart shape with her hands.

The fashion star shared another clip to her Insta Stories a week ago of her growing baby as he shifted around inside her.

‘He loves to stick his butt out right at my belly button,’ she captioned a worldless video her her lying on a bed and placing her hand on her stomach.

In a recent interview with Grazia, Ashley revealed she hasn’t found it ‘easy’ to embrace her pregnant body.

The plus-size model claimed that she has a ‘complicated relationship’ with her appearance.

Saying she hasn’t welcomed all the changes pregnancy has caused to her figure, Ashley explained to the publication: ‘I feel like we all have complicated relationships with our body. Mine has been changing in some new and interesting ways.

‘It hasn’t been easy to embrace my pregnant body, but it’s definitely a reminder of how awesome our bodies truly are.’

The Pretty Big Deal host also confessed to having ‘meltdowns’ over many of her clothes no longer fitting her pregnant frame.

‘This morning I had a mini meltdown because nothing fits me,’ she said. ‘I texted my stylist and said, “I need a fitting. I just need five key pieces.”‘

She has been open about her pregnancy, sharing photos of her rolls and stretch marks and weight gain.

Though she doesn’t care about her pregnancy weight gain. Speaking a month ago the brunette beauty wrote on Instagram: ‘Throughout my pregnancy so far I’ve gained 50lbs. And the best part is, I don’t care! I have never felt better, and I am so thankful that my body and son have allowed me to be as mobile and flexible as I have been.

‘Between working out, yoga, acupuncture and lymphatic massages- I finally feel like I figured out this whole pregnancy thing and how to feel my best.’

Ashley compared her pregnancy to a daily ‘sci-film.’

The Nebraska native garnered gushing praise for the photo that earned over 870K likes within its first three hours of posting.

Fellow model Emily Ratajkowski was even enamored, dropping a few heart-eyed emojis in the comments. 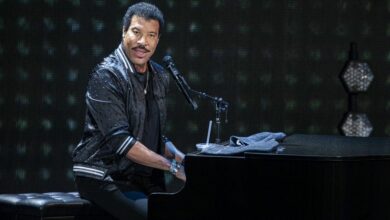