In her latest exhibition, “My Silk Road,” the Algerian visual artist Salima Ayadi presents a tribute to her cultural heritage with 19 paintings and 30 scarves inspired by — among other things — Islamic architecture, ceramic and faience patterns and calligraphy.

The exhibition opened at the National Museum of Antiquities and Islamic Art in Algiers on Jan. 22 and runs until Feb.13.

Ayadi graduated from the School of Fine Arts of Algiers with a degree in visual communication in 1982. For more than 37 years, she has produced silk-painted works  — a technique to which she was introduced by an artist friend while on a trip to Switzerland.

She has created artworks and scarves for national institutions such as the Senate and the People’s National Assembly, or for large companies including Sonatrach, Sonelgaz, Air Algeria, to name a few.

“For national institutions, I have worked on the cultural and historical heritage of Algeria, which is particularly rich. My works represent landscapes and monuments of all regions of the Casbah of Algiers, the Tassili n’Ajjer in the South-East, or the Berber patterns of Kabylia,” Ayadi said.

“These creations have been exhibited and some of them have been offered to foreign partners.” Her work has been shown in numerous group and individual exhibitions both at home and in Libya, Morocco and Iran.

Her first solo exhibition, held in 2017 at the Palace of Culture Moufdi Zakaria in Kouba, was a great success. “This exhibition (was very important), because it allowed me interact and mingle with the public,” she said.

At the time, her name was not particularly well-known outside of the art scene, but that soon changed. “I was very pleasantly surprised by the warm manner with which the public welcomed my work, encouraging me to further pursue this discipline,” she said. Discipline is a particularly apt word for her chosen medium.

“Silk painting relies on a quite difficult and complex technique. Indeed, this fabric — smooth and refined — is as delicate as it is (unpredictable),” Ayadi explained.

“To begin with, you have to prepare the drawing, make a line with the outliner — this thick gum with a translucent appearance called ‘gutta-percha’. This technique enables you to reduce the diffusion of the color outside the work area, on which you can create patterns and superimpose several colors without the risk of mixing them. This step is particularly difficult, any error is fatal, as it can neither be corrected nor erased.”

Each painting is created over a series of stages, each with its own potential pitfalls. Ayadi said that her selection of colors — reds, blues and greens are particular favorites — is based on the idea behind each painting. Once the selection process is complete, she can get to work — an often-painstaking process, Ayadi said.

“You have to be meticulous and patient throughout the implementation of the work,” she warned.

Behind each piece lies her passionate love of her Algerian heritage and her country’s rich and diverse culture.

Currently, besides the “My Silk Road” exhibition, she is focused on producing a book of her work, which she hopes to release in the next year or so.

“It is a project that is close to my heart,” she said. “It will include works that show the wealth and variety of cultural heritage of all regions of Algeria.” 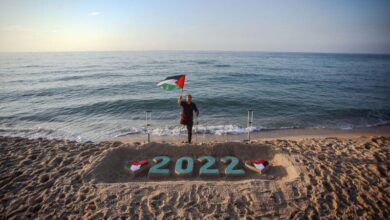 Get a Taste of Mediterranean Cinema in Morocco’s Tetouan