Arnold Schwarzenegger gushed about being a grandfather and admitted he didn’t know the gender of pregnant daughter Katherine’s baby on Thursday on a talk show.

The 74-year-old actor while visiting Jimmy Kimmel Live was congratulated by the host for Katherine, 32, and her husband Chris Pratt, 42, blessing him with another grandchild ‘on the way’.

‘It’s on the way, and I’ll tell you one thing, that it is the easiest thing to be a grandfather,’ said Arnold, who wore a colorful Hawaiian shirt, grey coat and dark jeans. Why do you say that?,’ asked Jimmy, 54.

‘Because they come over to the house, you play with Lyla for around an hour or two, put her on the horse, put her with the dog. I play with the dog. And after two hours, they leave,’ Arnold said referencing his one-year-old granddaughter Lyla Maria.

The former Governor of California said that he had a ‘great time’ when Chris and Katherine come by with Lyla
‘He’s a fantastic guy. A great son-in-law. I love my daughter Katherine is so wonderful and I’m so proud of her,’ Arnold said.

‘They’re great. When they come over the whole house lights up. And the animals are there,’ he added.

Jimmy asked if Katherine and Chris would tell him the baby’s gender or if they’d be too worried that he’d ‘accidentally blow it?’

‘I really don’t know. But I do blow it a lot of time,’ Arnold said.

He noted that his ex-wife Maria Shriver, 66, never wanted to know the gender beforehand of their four children.

‘It was always a guessing kind of a game. I think because Katherine is a lot like Maria she will probably go in the same direction and not want to know. It’s just a guess. Also, she cannot trust me,’ Arnold said.

It was announced in December that Katherine and Chris were expecting their second child together. 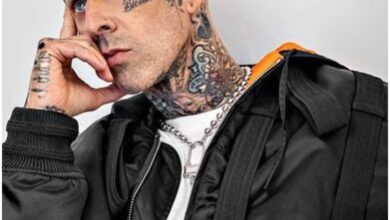 Here is Why Travis Barker Was Rushed to The Hospital

James Franco admits sleeping with students from his acting school Is Angelina Jolie Now Engaged to a Syrian Actor?