While Russia is embroiled in its invasion of Ukraine, surging tensions elsewhere in the Kremlin’s backyard are threatening to reignite conflict between Azerbaijan and Armenia.

The two Caucasus nations fought a 44-day war over the disputed region of Nagorno-Karabakh that killed thousands in late 2020 until Russian President Vladimir Putin brokered a ceasefire deal. That agreement involved Russia sending 2,000 peacekeeping troops to monitor the truce in Nagorno-Karabakh, a largely Armenian-populated territory that’s recognized internationally as part of Azerbaijan.

The Defense Ministry in Moscow has accused Azerbaijan of violating the truce accord by advancing forces into a village and surrounding heights inside the Russian monitoring zone, and of deploying Turkish-made drones against Armenian troops in the area. The defense army of the unrecognized Nagorno-Karabakh Republic said three Armenian soldiers were killed and 14 wounded during March 24-25 clashes.

Azerbaijan initially denied breaching the truce agreement. But after Russia said Azerbaijani forces were pulling back following negotiations, the Defense Ministry in Baku responded in a statement that there were “no changes in our army’s positions” in the area. It accused Moscow of showing “disrespect for Azerbaijan’s territorial integrity.”

With strong support from its ally Turkey, Azerbaijan took control of part of Nagorno-Karabakh during the 2020 war and also won back seven surrounding districts occupied by Armenians for nearly three decades. Russian peacekeepers patrol the contact line between Azerbaijani and Armenian forces, including a key road that links Armenia to Nagorno-Karabakh.

Some in Armenia fear the Kremlin may withdraw peacekeeping troops from the region to send them to reinforce the war effort in Ukraine. Russian forces stationed in neighboring Georgia’s breakaway region of South Ossetia were redeployed to Ukraine earlier this month, according to local media reports. Russia fought a 2008 war with Georgia over South Ossetia and placed troops there after recognizing the region as independent.

In January, Armenia and Turkey began negotiations aimed at normalizing relations between their two states in an attempt by the longtime foes to overcome more than a century of enmity. Turkey sealed its border with Armenia in 1993 in solidarity with Azerbaijan over Nagorno-Karabakh but argued that Baku’s victory in 2020 meant the conflict was no longer an obstacle to talks with Armenia. 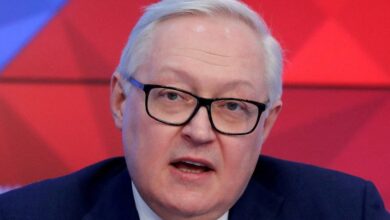