Eggs can be good for you—but it’s complicated

Eggs have experienced a roller coaster ride of highs and lows in popularity over the past several decades. Eggs were once a breakfast staple in most households. But in 1968, the American Heart Association recommended that people limit their cholesterol intake to no more than 300 mg per day, which put eggs on the naughty list as a high cholesterol food.

Since one large egg has about 186 mg of cholesterol, the AHA recommended no more than three per week.

Through the 1970s and ’80s, eggs were still deemed relatively unhealthy due to research suggesting that dietary cholesterol could raise the blood cholesterol levels linked to heart disease.

Then in 2015, the Dietary Guidelines for Americans dropped the limits on cholesterol and egg consumption to focus more on healthy eating patterns than specific foods.

A 2020 analysis of all the major research to date, which was published in the journal Circulation, noted that evidence from observational studies generally doesn’t indicate a relationship between dietary cholesterol and the risk of cardiovascular disease.

That said, the research team concluded that it’s a good idea to stick with one egg a day, or up to two a day if you have a pattern of healthy eating and your blood cholesterol levels aren’t elevated. 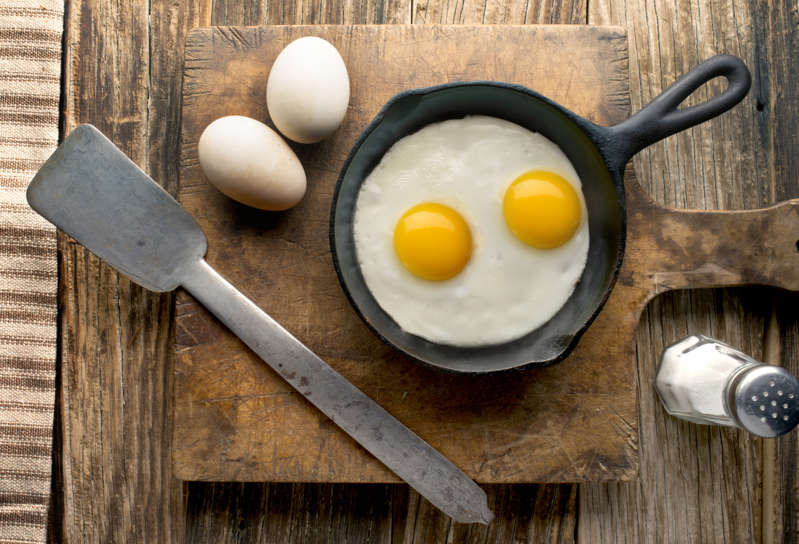 A small study published in 2019 in the American Journal of Clinical Nutrition looked at the effect of two eggs per day on 20 overweight postmenopausal women.

After four weeks on a two-egg-per-day diet consumed via a frozen breakfast meal, there was a four week “washout” period. Then the participants ate just two egg whites (no yolk) per day as part of the meal, for another four weeks.

The researchers found no significant changes to cardiac markers, including total cholesterol, HDL (good), or LDL (bad) cholesterol levels when they switched from egg whites to yolk-containing meals.

But, what about long-term egg intake?

The Australian researchers reported that people on the high-egg diet did not experience worsened blood lipid levels, inflammation, or oxidative stress, although they also didn’t lose any more weight than those on the low-egg diet. Both groups lost about 7 pounds on the calorie-restricted diet.

This DIABEGG Study was a year in length (that’s a lot of eggs!) and sheds light on the longer term effects of high egg intake.

A huge international project published in 2020 in the American Journal of Clinical Nutrition investigated the association of egg intake with blood lipids, heart disease, and mortality.

Fifty countries around the globe participated, spanning low-, middle-, and high-income regions. The researchers compared more than 146,000 people with either high-egg diets (seven or more whole eggs per week) or low-egg diets (less than one whole egg per week).

Egg intake wasn’t linked to any change in blood lipids, cardiovascular disease adverse events, or mortality. Basically, people who ate an egg every day didn’t have heart disease any more than those who ate less often.

The health benefits of eggs

Eggs provide many vital nutrients: protein, vitamins, and minerals. What’s more, the nutritional composition of eggs can be altered by the hen’s diet.

More selenium, folate, omega-3 fatty acids, and vitamins D and E exists in eggs if the hen consumes them.

Eggs are inexpensive, widely available, and tend to last a long time without spoiling. (Here’s a look at which vitamins you need at any age.)

While eggs aren’t part of a vegan diet, if you are a vegetarian, eggs can be a good source of vitamin B12.

Vitamin B12 is important for red blood cells, the nervous system, and energy (among other things), but is generally only found in animal-derived foods, like meat, cheese, and eggs.

The recommended dietary allowance (RDA) for vitamin B12 is 2.4 micrograms per day for adults, and an egg contains 0.6 to 1 micrograms, or about 25 to 42 percent of the RDA.

Eggs contain choline, an essential nutrient found deficient in nine out of 10 American adults. Choline is heavily involved in metabolism and neurological functions, such as neurotransmission, muscle control, memory, and mood.

The recommended adequate intake for choline is 425 milligrams per day (mg/d) for women, 450 mg/d for pregnant women, 550 mg/d for lactating women, and 550 mg/d for men.

One egg yolk contains 125 to 169 mg of choline, or roughly 30 percent or more of the recommended intake for adults.

Eggs are rich sources of lutein and zeaxanthin, two pigments called carotenoids that are associated with a lower risk of macular degeneration, cataracts, and some cancers.

Lutein-enriched eggs are produced by altering the hens’ diets.

Eggs are rich in protein and contribute to satiety, meaning they make you feel full so you might eat less over time and potentially lose weight. In a study published in 2017 in Nutrients, researchers found lower levels of the “hunger hormone” ghrelin after participants ate an egg breakfast.

So to sum it up, here are some of the important nutrients you can find in one large egg, according to the USDA database:

Recent research suggests that eggs may possess more pros than cons when it comes to nutritional benefits, but it depends on how much you eat, your own personal risk factors, and your overall eating pattern. The American Heart Association suggests a limit of one egg (or two egg whites) per day for people who eat them, as part of a healthy diet.

If you are at risk for heart disease or have had heart attack, it’s a good idea to keep an eye on the total amount of cholesterol in your diet, according to the AHA.

How to build a better nighttime routine for your mental health

What to disinfect at home to avoid infection

The #1 Food to Keep In Your Pantry for Weight Loss