Jing He has become used to online racist abuse.

The 26-year old from Shanghai began posting a video diary about the COVID-19 outbreak to her social media accounts in early March. Her aim was to depict life in her home city as the epidemic peaked in China.
More than 60,000 people viewed her first Facebook video on the topic, with many sharing messages of thanks and support.

But virulent, hateful abuse began to appear on later posts.

One comment under a video Jing made for the Facebook page of the China Minutes news site mocked the appearance of Asian people, referring to them as “slanty eyed b****rd’s”. Another detailed a conspiracy theory of how China was responsible for the virus as a means of population control.

These posts and many others, which appear to have since been removed, left Jing “hurt” and wondering whether she should ever share her content again.

Jing is far from alone in being subjected to racist abuse around the outbreak of COVID-19.

There have been numerous reports of anti-Asian racism on the streets of Australia, India and the United Kingdom. In the United States, the reporting forum Stop AAPI Hate has recorded more than 1,100 instances of anti-Asian harassment since it was set up in late March.

On social media sites, the scale of abuse is even more apparent.

An analysis by Al Jazeera found more than 10,000 posts on Twitter that included the term “kung-flu” during March alone – although the true total was likely much higher given a number of variations of the phrase were being used across the site.

While some uses of “kung-flu” related to news reports of a White House official allegedly using the term, thousands of others sought to employ it to describe the virus or to antagonise users who were offended by its use. Other posts employing racist and offensive language such as “chop fluey” and “rice rabies” were also visible on the micro-blogging platform.

Elsewhere, there had been 110 million views of posts tagged #chinese_coronavirus on the Chinese-owned app TikTok as of Saturday. Some videos lamented the use of such terms as a subtle form of racism. Others, however, included a clip of a man with chopsticks in his hair and pulling his eyes back to audio of US President Donald Trump explaining why he called COVID-19 the “Chinese virus”. 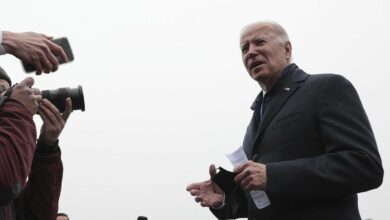 Another round of rockets fired towards Israel from Gaza