Since Russia’s invasion of Ukraine, Hungary has found itself in a delicate geopolitical position.

Under the leadership of Prime Minister Viktor Orban, the Hungarian government has become the most Russia-friendly NATO and European Union member.

Orban, the poster child for illiberal populism in Europe, has looked to Russian President Vladimir Putin’s style of governance as an attractive alternative to Western European-style democracy. The two men have had 13 meetings over the years – the most recent taking place just weeks before Russia’s invasion of Ukraine on February 24. Orban at the time was dismissive of talk about a looming war while stressing the importance of Budapest and Moscow’s close ties.

approximately 80 percent of its gas and more than 50 percent of its oil from Russia. The two countries also maintain important relations in the banking and tourism sectors.

Going back to the 2014 annexation of Crimea, Hungary framed Russia’s previous violations of Ukrainian sovereignty as an issue beyond its jurisdiction. As Orban saw it, Russian actions in Ukraine, a country not in NATO, did not concern Hungary’s responsibilities as a member of the Western alliance. He dealt with friction between NATO, Ukraine and Russia through a “strategic calmness” doctrine. Budapest also firmly stood against Ukraine’s potential entry into NATO.

Budapest’s posture towards the war in Ukraine has been somewhat complicated and rests on a carefully balanced approach.

On one hand, Hungary quickly condemned the invasion and did not veto some EU sanctions on Moscow. The Hungarian government has also opened its eastern border to Ukrainian refugees fleeing the conflict. Additionally, the deployment of NATO troops to the alliance’s eastern flank via Hungary is another area where Budapest has cooperated with, rather than obstructed, NATO-led efforts to counter Russia.

On the other hand, Orban’s government has stood against EU sanctions on Russian oil and gas, pledging to block them and ultimately making the bloc water down its sanctions package.

At the same time, Hungary has also refused to suspend the expansion of the Paks Nuclear Plant, which Russia’s state-owned nuclear power supplier Rosatom finances. Additionally, Budapest has opposed sending arms to Ukraine and forced the EU into not sanctioning the head of Russia’s Orthodox Church, Patriarch Kirill.Russian media platforms have focused on Orban’s opposition to arms transfers to Ukraine to shed light on NATO’s internal rifts since the eruption of the war.

“[Orban] enjoys pitting the powers against each other to the benefit of Hungary.”

Hungary’s decision to play a relatively small role in supporting Ukraine logistically has decreased the likelihood of Budapest ever being a future target of Moscow’s vengeance. Thus, avoiding major damage to Budapest-Moscow relations amid this war has served the interests of Orban and his country, analysts say.

But staying on good terms with Putin’s government post-February 24 has hurt Hungary’s standing in NATO and the EU. Perceptions of Budapest being too Russia-friendly since the war broke out have upset even Hungary’s fellow Visegrad countries – the Czech Republic, Poland and Slovakia.

Tensions between Budapest and Kyiv help one understand Hungary’s positioning vis-a-vis this conflict. Despite Hungary having always been a supporter of Ukrainian independence and bilateral ties improving, the issue of Ukraine’s roughly 150,000-strong Hungarian minority was “always a little cloud over their relations”, according to Gyarmati.

Legislation previously passed by Ukrainian lawmakers restricting the use of non-Ukrainian languages caused friction between Kyiv and Budapest. Although the legislation targeted the use of the Russian language in Ukraine, Gyarmati said that “there was some collateral damage on all other minority languages [including Hungarian] in Ukraine.”

Then, after the war broke out, the tensions over Hungarian minority rights in Ukraine contributed to a vicious circle in bilateral relations, with Kyiv questioning Budapest’s determination to stand with Ukraine against international aggression. 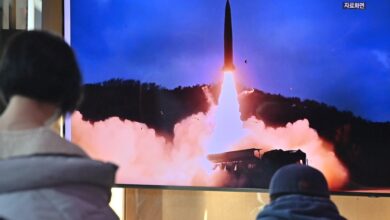