In normal times, Lebanon’s thoroughfares are a hodgepodge of billboards, hawking everything from chewing gum to engagement rings.

During election season, the highways become a sea of campaign advertisements. At other times, the signs are used to offer public service announcements or publicize NGO campaigns against issues like child marriage and bullying.

But these days, the normally cluttered roadsides have been replaced by rows of blank white slates and blackened LED screens, a highly visible testament to the country’s economic malaise.

Like many other industries in Lebanon, the outdoor advertising sector has been slammed by the double blow of the coronavirus lockdown and the country’s compounding currency and financial crises.

While one industry executive said the sector has seen a 90 percent fall in revenues, some in the industry are hopeful that as the economy reopens with more focus on nationally produced products, rather than imports that the country has long relied on, doors might open to a new clientele.

Before the economic crisis, the outdoor advertising market in Lebanon amounted to $40 million a year, according to Antonio Vincente, CEO of Pikasso, the oldest and one of the largest outdoor advertising companies in Lebanon, which now has operations throughout the region. Vincente is also president of the Syndicate of Outdoor Advertising Companies of Lebanon.

Over the past few years, he said, the digital billboard market in particular had been expanding, allowing companies to buy advertising time slots on digital screens.

“We were at par with our colleagues in the West in the most sophisticated markets, but not with the same budgets,” Vincente said. “…Now after the crisis, I don’t even dare telling you the forecast of this year. The backdrop [fall in revenue] is around 90 percent. It’s havoc.”

The industry took a hit after mass anti-government protests erupted in October 2019, with frequent roadblocks over the next several months, making clients reluctant to book advertising space when they did not know whether roads would be open, Vincente said.

Like most industries, the outdoor advertisers have also suffered from the instability and devaluation of the Lebanese currency. But the “collapse” came with the COVID-19 pandemic and lockdown measures, which prevented most people from being on the roads at all, Vincente said.

“The out-of-home (advertising) audience vanished, not only in Lebanon but in most cities in the world where you had COVID-19 measures taken,” Vincente said.

But, he said, “the difference between Lebanon and other countries is that as soon as the lockdown was lifted and cities entered into the new normal, audiences were back and the economy helped the medium to kick off again…whereas in our situation, things are worsening at the level of the politics and the economic situation.” 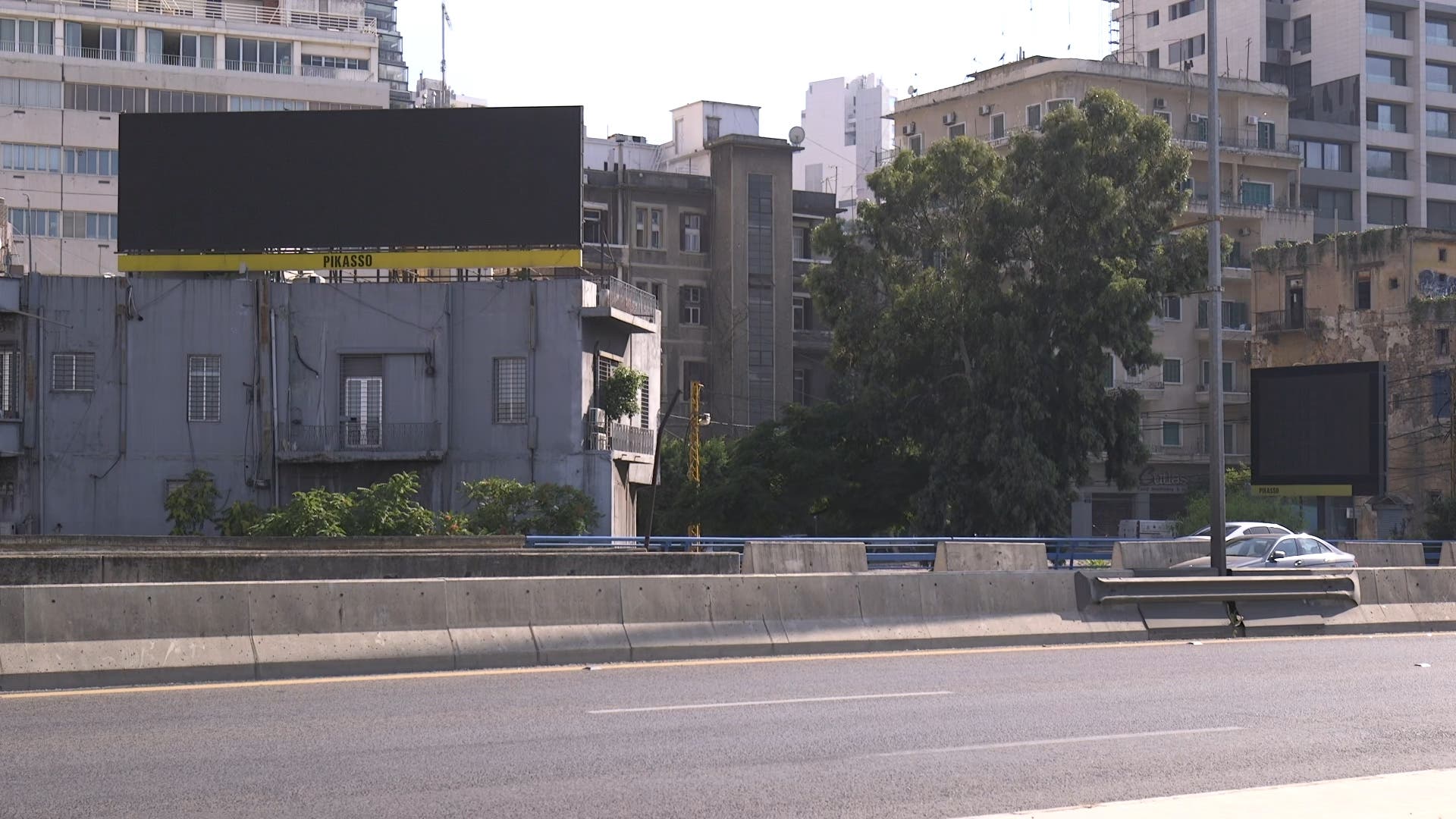 A blank billboard is shown in Lebanon amid the ongoing economic crisis that has been exacerbated by the coronavirus pandemic. (Screengrab)

Vincente said his company had only been able to survive because of a “very heavy” decision to make layoffs in its Lebanese operations.

“At least the other countries took measures to protect the workforce [during lockdowns]…” he said. “Here, there is no safety net. But also, in other countries (the governments) helped the companies.”

While the company had been able to renegotiate its leases with landowners, he said, it is currently lobbying for a waiver of municipal taxes for at least part of the year.

Meanwhile, he said, a promised line of credit from the central bank to help businesses through the lockdown never materialized, while a few banks offered loans – but only in dollars, a risky prospect due to the devaluation of the Lebanese currency and the fact that he’d have to secure enough dollars to pay back the loan at whatever rate lira are sold for in the future.

“We’re left by ourselves in the sea at large,” Vincente said. “Whoever will sink will sink without help, and this is from top to bottom. There’s no net, no safety for anyone here.”

Rebound on the horizon

“The outdoor advertising industry in Lebanon suffered during this crisis, but it will easily go back to normal once everything goes back to normal,” he said. “It was paused – it was not terminated.”

“There were no clients, because you can’t drive around, so we removed all the visuals from our billboards,” he said.

But Akl said in July the company plans to turn about 36 LED screens back on in hopes that business will begin to come back, and he said local businesses have been calling to inquire. The company has also been offering incentives in hopes of wooing clients to come back.

Vincente argued that the resurrection of the outdoor advertising industry will be key to Lebanon’s economic recovery and to building up local industry to replace the country’s reliance on imports.

“The government now is encouraging and promoting the national industry, so new brands, and these new brands need to build trust with consumers for them to buy them,” he said.