A major American detour on the Riyadh-Moscow-Beijing policy, trying to cut it off at an urgent demand, and to return  Saudi to the direction of Washington, by leaking and publishing documents that were said to be secret indicating Iranian plans to bomb Saudi Arabia.

And while everyone understood that Iran, like all totalitarian, dictatorial states whose people revolt against the injustice of their rulers, is working to export the crisis of protests that afflict it abroad, the United States of America hastened directly to explain the statements and positions of military, security and political leaders, including the Iranian Minister of Intelligence, Ismail Khatib, and also the commander of the Revolutionary Guards,the Iranian Major General Hossein Salami, by warning Saudi Arabia that he is a potential and imminent Iranian threat,
The secret American media and security machine began to intimidate the Saudis and provide far from accurate information indicating an imminent Iranian aggression.

To complete the scenario and play, the United States mobilized its forces in the Arab region, knowing that those forces were exposed to Iran and its militias for years, and those militias bombed American bases on several occasions, especially in the wake of the killing of Qassem Soleimani in an American raid near Baghdad airport.

What is certain is that Saudi Arabia, out of a sense of caution and prudence, and in an attempt to strengthen its security, has taken these threats seriously, based on a well-known Iranian policy that is exporting its crises abroad, and chrging  others the responsibility for its failure.

And it had rounds and turns in pressuring Hezbollah or the Palestinian factions to open fronts with Israel whenever Iran was disturbed by the sanctions or its negotiating rounds on the nuclear file failed.

In addition to providing $400 million in humanitarian support to Ukraine and the refugees, there are reports of secret US, German, British and Saudi intelligence security cooperation regarding the Iranian file. Last September, it is managed by this alliance, which prompted it to threaten those countries with a harsh response and prompted Saudi Arabia to mobilize its forces. 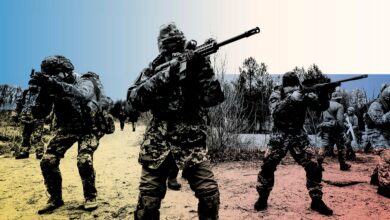