An ‘offline chair’ that can block a sitter’s access to the internet has been designed to help smartphone addicts get back to reality and find a moment of relaxation.

The chair is the brainchild of 28-year-old Polish designer Agata Nowak, who hopes interest in the seat will increase as people grow more aware of internet addiction.

Upholstered in a soft, grey covering fabric, the chair provides a ‘cosy, intimate, comfy and silent’ space to isolate its occupants from the surrounding environment.

Its key feature is a so-called ‘offline pocket’, which blocks WiFi and mobile signals form reaching any device placed inside.

‘Studies show that an average user unlocks the phone 110 times per day, and record-breakers even 900!’ said Ms Nowak, who began work on the offline chair in 2015, while studying Furniture Design at the University of Fine Arts in Poznan, Poland.

At this time, the average time that people spend on their phones was estimated at around 2 hours each day.

Less than five years later, however, and the average use is reported to have increased to around four hours each day — around a quarter of our waking lives.

‘Back then, it was likely you would see people stuck on their phones but now it has become ordinary.’

‘We are over-stimulated. We are now turning to activities such as meditation and mindfulness as we need solutions to help us calm down, relax.’

‘We have apps that help us calm down before sleeping, but I still believe we feel better when we forget about our smartphones for a moment, not hear notifications, and just enjoy it,’ Ms Nowak added.

‘Putting this into practice is much harder though, because we are simply addicted to it.’

Ms Nowak is looking for a producer to help develop her chair commercially. 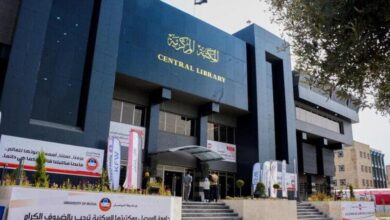 Mosul Central Library: A Testament to History After ISIS

Indian Youtuber Arrested After Sending His Dog Floating Into The Air!