In the wake of White House pressure, an independent board charged with overseeing billions in federal retirement dollars announced on Wednesday that it would indefinitely delay plans to invest in some Chinese companies.

In a statement, the Federal Retirement Thrift Investment Board (FRTIB) cited a “meaningfully different economic environment” due to the coronavirus pandemic and the nomination of new board members to explain the deferral.

The FRTIB oversees the Thrift Savings Plan (TSP), a retirement savings fund for federal employees and members of the military, which includes a $40bn international fund. This year the fund was slated to begin tracking an index that includes Chinese companies under scrutiny in Washington.

The administrators froze the plan days after the Trump administration told it to “halt all steps” tied to shifting its $40bn international fund to track the MSCI All Country World ex-U.S.A. Investable Market Index.
Democratic Senator Jeanne Shaheen, who had co-sponsored unsuccessful legislation to prevent the investment change, hailed the decision.

“It’s reckless to prop up companies that threaten United States interests and values, and it would be particularly egregious to do so with the hard-earned savings of federal workers,” she said. “Today’s reversal sends a clear message to China that there are consequences for its malign behaviour.”

The decision marks a win for China hawks in Washington, who have taken advantage of deteriorating relations with Beijing over the origins of the coronavirus to push measures that are tough on China.

The Trump administration recently released rules to make it tougher to export certain types of advanced technology to China and is accelerating efforts to remove global industrial supply chains from China.

President Donald Trump has accused Beijing of failing to alert the world about the severity and scope of the virus, which has killed more than 80,0000 people in the US and originated in the city of Wuhan, China, late last year. China has denied the accusations.

The FRTIB decided in 2017 to make the investment shift in the second half of 2020 to boost returns, a decision hailed by unions arguing federal workers should have the same rights as other employees to invest in emerging market indexes that include China.

But China hard-liners in Washington pushed back, arguing that US federal employee pension dollars should not fund firms such as aircraft and avionics company Aviation Industry Corp of China, which supplies China’s military, as well as surveillance company Hangzhou Hikvision Digital Technology Co Ltd, which was sanctioned by Washington for human rights abuses.

They also pointed to a heightened risk for investors, since Chinese companies do not have to comply with strict US financial disclosure rules.

After legislation to prevent the investment shift languished in Congress last year, China hawks made a successful last-ditch effort to convince the White House to halt the investment plans earlier this year.

It culminated in the nomination by Trump this month of three individuals to the five-member board, and a letter from Labor Department Secretary Eugene Scalia. The secretary oversees the board, exhorting it to halt the investment preparations. Scalia has no authority to stop the investments under US rules.

Trillions of dollars worldwide passively track benchmarks which are compiled by third-party index providers based on a range of criteria, including companies’ market capitalisation, as opposed to fund managers picking the stocks themselves. 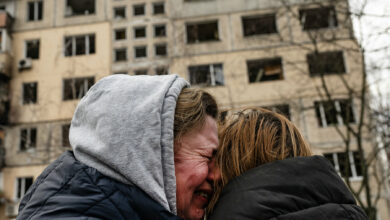 Journalist-turned-fighter: I can’t stand aside as Ukraine bleeds Turkey accuses Greece of ‘hostile action’ against its jets