Taiwan’s swift decision to shut its borders during the early days of the pandemic earned it a low death rate and sense of normalcy that made it the envy of the world.

Nearly two years later, the self-ruled island may be a victim of its early success, some experts say, as health authorities continue to pursue an isolating “zero COVID-19” policy despite the widespread availability of vaccines.

“People in Taiwan have been – let me use a strong word – ‘spoiled’ with the good life and with that there’s a low tolerance on any community outbreak,” Chunhuei Chi, a professor and director at the Center for Global Health at Oregon State University, told Al Jazeera.

Taiwan’s border restrictions remain some of the strictest in the world, requiring even vaccinated arrivals, including citizens, to undergo 14 days of hotel quarantine – although Hong Kong and mainland China maintain an even stricter regime of 21-day hotel confinement.

In May, authorities closed the border to anyone without citizenship or an existing alien residency certificate – the equivalent of a US green card – creating a headache for foreigners with job offers or school placements.

Although authorities recently began allowing the return of foreign workers, students, academics, and professionals holding a three-year “gold card” visa, the window for entry will close again in mid-December as Taiwan prepares for an influx of citizens from overseas before Lunar New Year on February 1.

In some cases, foreigners already living in Taiwan have been forced to leave indefinitely as their visa requires an exit and re-entry for renewal. In other cases, foreign residents face the prospect of living under an unclear visa amnesty while COVID-19-related rules appear to change on a case-by-case basis.

Daniel Johnson, a British-South African tech entrepreneur who moved to Taiwan a year ago on a working holiday visa, is among those stuck in limbo.

Johnson, who is squarely in line with the kind of expatriate the government says it wants to attract, must apply for 30-day “extensions” each month. Each time he has had to tell officials he does not feel safe returning to the UK and give up his residency certificate and national health insurance card, which most foreigners are eligible to apply for after six months of continuous residence.

“Getting a visa upon arrival was fine enough, the difficult thing was finding out the updates on the different visas, because each one had its own nuances and things had changed,” Johnson told Al Jazeera. “But the documentation didn’t represent that. I kind of assumed it would be multilingual documentation, and there was in some cases, but in a lot of cases it didn’t exist at all or it was old.”

Like many foreigners, Johnson has found that immigration and consular officials do not have the leeway or information to navigate COVID-related changes, often getting different answers to questions depending on the day.

In some cases, the border has been quietly opened to foreign professionals, executives and specialists who successfully applied for an emergency travel exemption through their company, according to industry groups such as the American Chamber of Commerce (AmCham).

These exceptional visa approvals following special application and case-by-case review have been used across a range of industries for specialists needed on site in Taiwan, as well as by executives on rotation, according to AmCham President Andrew Wylegala, who described the system as “welcome” but not ideal.

“There is concern that it is a little bit ad hoc, just because it may be different from different sector to sector, the timelines may not be completely clear and the listed criteria are somewhat vague, or the process hard to work through,” Wylegala said.

Wylegala said in the long term Taiwan could lose out on business and trade deals to its neighbours that reopened.

Although COVID-19 has affected smaller businesses and sectors like tourism, Taiwan’s economy overall has seen strong growth over the past year led by its semiconductor and tech industry.

“People do not see that this is damaging to our economy as a whole, just business travellers, tourists, people who can afford to travel,” Hong-Jen Chang, who served as director of Taiwan’s CDC from 1999 to 2000, told Al Jazeera.

With a national referendum looming in December and local elections in 2022 for key posts like the mayor of Taipei City, the government is seen to have little incentive to open up as the media and Taiwan’s main opposition political party continue to highlight the dangers of the virus.

“There is a perfect Taiwanese idiom for this: ‘The performers want to end the show, but not the audience,’” said Chi, the Oregon State University professor. “Even if the policymakers are thinking and planning about relaxing and opening up, knowing that the audience, the Taiwanese people, have extremely low tolerance for any outbreak – even a minor outbreak – tends to push them into a more conservative mode.”

Even after a major outbreak in May, the numbers of COVID-19 cases and deaths remain among the lowest in the world at less than 17,000 and 848, respectively, according to the Taiwan Centers for Disease Control (CDC).

“What happened in May and June in Taiwan from the international standard is very mild, but was considered very serious in Taiwan,” Chi said. “This public sentiment put undue pressure on policymakers, and on politicians.”

After an initial shortage of vaccines earlier this year due to delays by the international vaccine initiative COVAX, Taiwan has slowly made up for its shortfall through donations from the US, Japan, Lithuania, Slovakia and the Czech Republic and the production of its domestic Medigin vaccine.

Vaccination rates have hit 77 percent for the first dose and about 50 percent for both, according to Taiwan’s Central Epidemic Command Center.

Despite being on track to reach near maximum vaccine coverage within a few weeks, authorities have given little indication that reopening is on the cards anytime soon.

Chang, the former CDC director, said Taiwan would eventually need to open up but officials were in a difficult position as they weighed health concerns against the economy and public opinion.

Authorities could relax some travel restrictions by ramping up testing of arrivals from overseas, he said. But that would involve creating an even more complex system that might be difficult to communicate to the public.

“When you say one case is not tolerated, it’s difficult to design a system,” Chang said. “It’s doable, but the [government] may not have the support of the public. So that’s the problem. Because we are a democracy, right? Not like China.”

Ecuador to pardon up to 2,000 inmates after deadly prison riot 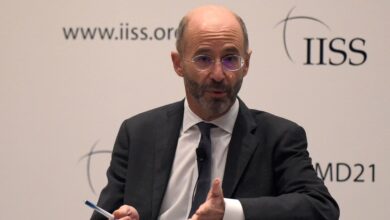