Adele felt like Jennifer Lopez when she organised her friend Alan Carr’s wedding.

The 43-year-old presenter tied the knot with his long-term partner Paul Drayton in a ceremony officiated by the ‘Skyfall’ hitmaker in the backyard of her Los Angeles home two years ago, and his pal embraced her role of being in charge of the big day, comparing it to Jennifer’s 2001 movie ‘The Wedding Planner’.

Alan said of his wedding: “It was amazing. Adele organised it in her back garden in LA – it was absolutely gorgeous and she paid for it all.
“I tried to give her some money and she said, ‘My treat ahahahaha’.
“She’s just adorable. She’s the sweetest person.

“I get asked a lot of loaded questions about her, like, ‘Has she changed? I suppose you don’t see much of her now…?’ But she has not changed one bit and she always has time for you.

“She’ll always pop in for a cup of tea or a glass of wine.”

Asked if he asked her to officiate the ceremony, he added: “She offered. She brought her clipboard out and said, ‘I feel like Jennifer Lopez in ‘The Wedding Planner’.’ ”

The ‘Epic Game Show’ host was thrilled with the effort Adele went to and admitted if she hadn’t intervened, he and Paul wouldn’t have had such a “perfect” day.

He said: “She even got photos of mine and Paul’s parents and the dogs, so it felt like they were at the wedding.

“It was the perfect day. It was the best day of my life. If I’d organised it, it would have been at a Harvester.”

Alan also recalled the drunken incident that kicked off his friendship with the ‘Hello’ singer.

He told Heat magazine: “We met at the BRIT Awards. When I was younger, I would get invited along to present an award and I was always p***ed.

“I went to an after-party one year and Adele was there. I said to her, ‘I love you!’. Then I leant against a wall, only it wasn’t a wall, it was a lift, and the doors open and I fell inside. 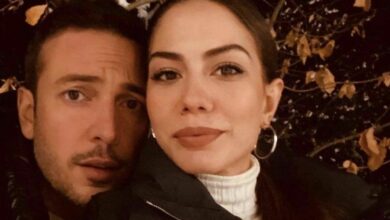