In the last six months of Mohamed Soltan’s prison sentence, he was placed in isolation in Egypt’s notorious Torah Prison, where he was beaten and tortured mentally and physically every day.

“I was completely cut off from the rest of the world, with no access to daylight or sense of time,” he said. Only jailed members of the armed group ISIL (ISIS) had access to his cell – and they attempted to recruit him.

“They tried to talk me out of my hunger strike, because ‘the world only respected hard power, might makes right’, they told me. They tried to sell me on taking matters into my own hands and joining their ranks to fight oppression,” said Soltan, an Egyptian-American human rights defender who was imprisoned for 22 months from 2013-2015.

Soltan, who was charged with “spreading false news” for tweeting about the dispersal of demonstrations and spent much of his prison sentence on a hunger strike, said he saw first-hand how ISIL members recruited inmates by exploiting their pain and grievances towards the Egyptian government.

HRF’s report – Creating Time Bombs: How Abuse in Egypt’s Prison System Fuels ISIS Recruitment – released on Thursday draws on testimonies from prisoners released between 2019 and 2021, who said ISIL continues to recruit prisoners, a practice partly fuelled by torture and abuse that is widespread in Egyptian prisons.

Since Egyptian President Abdel Fattah el-Sisi took power following a 2013 military coup, thousands of people have been imprisoned for their political opposition, including doctors who criticised the government’s handling of the COVID-19 crisis and TikTok influencers, while death sentences have risen three-fold.

Soltan’s father, Salah Sultan, was among 36 people sentenced to death in a mass trial in April 2015. Salah, a prominent Muslim scholar, has been in prison for eight years for supporting the 2013 anti-government protests.

El-Sisi has long claimed there are “no political prisoners in Egypt”.

But rights groups estimated 60,000 political prisoners are being held in Egyptian jails, more than half of the country’s estimated prison population of 114,000.

With an official prison capacity of 55,000, jails are severely overcrowded and, according to Amnesty International, the average space available to each inmate is 1.1sq metres (12sq feet).

Prisons conditions are “worse than they have ever been”, said Sarah Leah Whitson, executive director of Democracy for the Arab World Now (DAWN).

Abusive conditions have led to the death of as many as 958 inmates between June 2013 and December 2019, according to the Committee for Justice, a Geneva-based independent human rights group.

Former inmates said allowing ISIL members to mix with young, disenfranchised prisoners who oppose the government on political grounds and are regularly tortured, is creating a “ticking time bomb”.

“What is a catastrophe is that authorities have not separated the prisoners connected to real cases of terrorism from those who simply oppose the regime on political grounds,” Youssef*, a former inmate released earlier this year, told HRF.

“I have never seen the prison authorities interfere to prevent this from happening,” he added.

Egypt and Qatar have ‘agreed to resume diplomatic relations’ 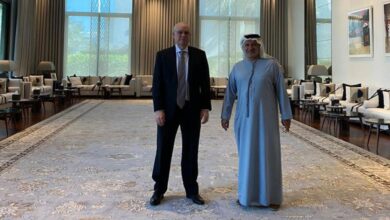