Tom Parker has revealed he’s making a documentary about his terminal brain cancer, admitting that it has been an ’emotional process’ so far.

The Wanted singer, 32, revealed in October that he had been diagnosed with stage four Glioblastoma and has been sharing his health battle on social media ever since.

Announcing the news of his new show on Instagram on Wednesday, the father-of-two also revealed he’s planning a fundraising concert.

‘As well as looking at our story, I’ve also been meeting some amazing people who are suffering from the same disease and meeting doctors and activists who are trying every day to raise awareness and to fight for more funding for vital research into brain cancer.

‘I have also decided to stage a fundraising concert, with some great artists, to raise money for @su2cuk and the National Brain Appeal and I’m really excited to tell you all the details very soon.’

Tom continued: ‘It’s been an eye opening, and at times, an emotional process but I’m really proud of what we are creating.

‘It’s time to raise awareness and increase the money available for research and if I can help do that with this project then I’ll be a very happy man!

‘Thanks again for all your support for myself and Kelsey and the kids, you have no idea how much we appreciate it!’

Speaking about his documentary, Tom also told The Mirror: ‘Almost a year ago, my world was turned upside down by my diagnosis.

‘I’m determined to fight the disease and the terrible situation of the chronically low level of research that goes towards finding a cure and treatment for glioblastoma.’

It is thought that the documentary will see Tom looking into potential treatments and meeting other brain cancer patients.

The show will be part of the Stand Up To Cancer campaign and proceeds from the concert, thought to be happening at the Royal Albert Hall, will be split between the charity and The National Brain Appeal.

It comes after Tom revealed he gets motivation and support from Glioblastoma brain cancer survivor Dave Bolton.

Dave was given three months to live before he managed to shrink his terminal brain tumour, after ditching carbohydrates and eating 2,200 calories of fat a day.

The former police officer, from the Wirral, Merseyside, had a Glioblastoma Multiform 4 brain tumour (GBM4) – known as ‘The Terminator’ for its low survival rates but seven years ago, after his tumour shrunk, he was able to undergo lifesaving surgery.

Tom, whose tumour has also surprised doctors by shrinking after his second dose of chemotherapy, remains positive that he will beat the disease.

The star admitted he’d found his latest round of chemo tiring but had a boost from seeing keynote speaker Dave. In a now-deleted social media post, former boyband star Tom wrote: ‘On the way up to London to get my obs done… 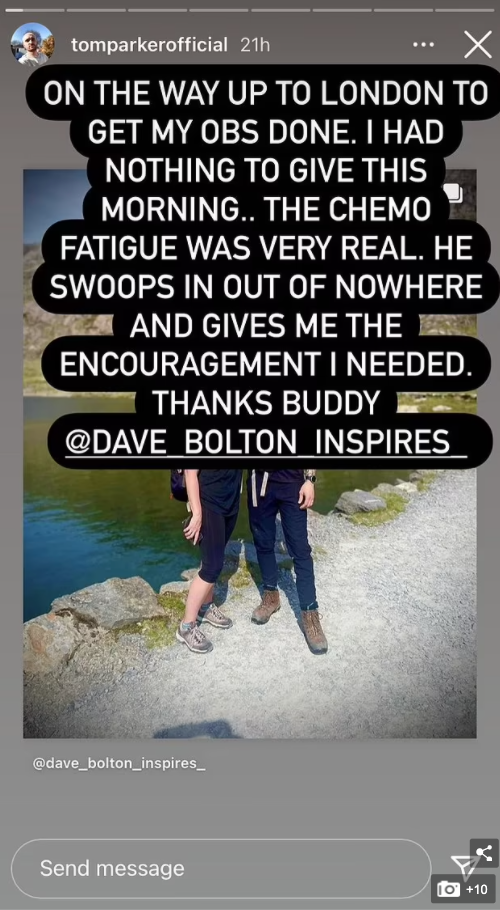 ‘I had nothing to give this morning. The chemo fatigue was very real. He swoops on out of nowhere and gives me the encouragement. Thanks Buddy, Dave Bolton.’

Tom has been very candid sharing the highs and lows of his cancer diagnosis and recently hit out at a troll who told him he would never beat the disease and that it would get him despite his fight to combat it.

Tom shared a picture of the Temozolomide Accord tablets he was taking to help his fight alongside the message, but a troll responded by cruelly saying it would ‘get’ him no matter how long his cancer battle was.

Responding to the picture of his medicine, the troll wrote: ‘Nobody has ever beat what you have. You can fight like hell, but it will get you.’ 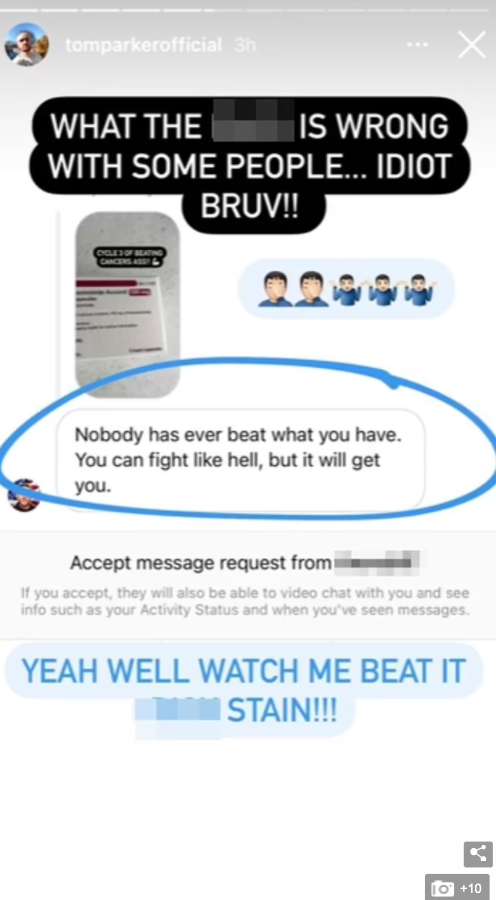 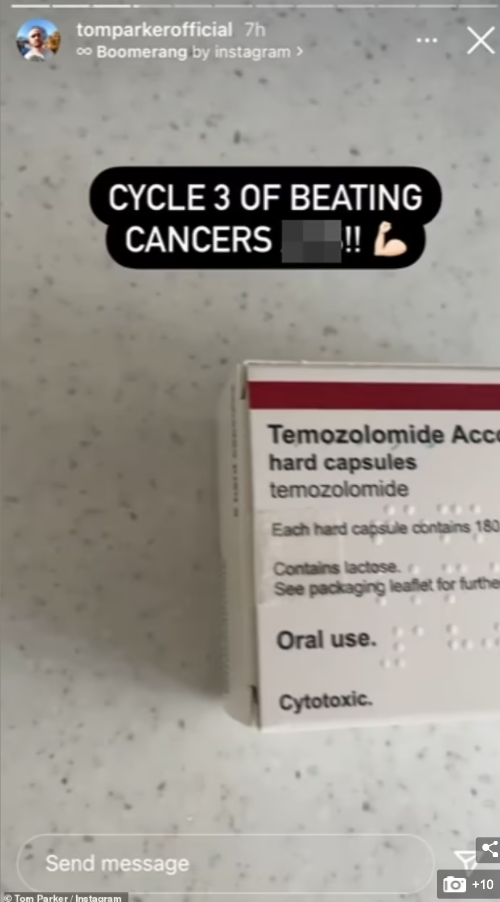 Tom shared the post with his followers, circling the insensitive message and saying: ‘What the f*** is wrong with some people…Idiot Bruv!!!’

Following the distasteful message, Tom also shared a video saying: ‘Am more sad about that post that someone put.

‘Like I’m not even bothered about what they actually said. The fact that they’ve gone out of their way to say that is just ridiculous.

‘Ridiculous. It doesn’t make sense. Why would you do that?’