Clashes between militias backed by Libya’s rival governments have killed at least 23 people and wounded dozens more, according to the country’s health ministry.

The fighting in Libya’s capital, Tripoli, on Saturday was the worst there in two years and has raised fears the country could plunge back into full-blown war.

Among the fatalities was Mustafa Baraka, a comedian known for his social media videos mocking militias and corruption. Baraka died after he was shot in his chest, said Malek Merset, an emergency services spokesman.

Merset said emergency services were still trying to evacuate wounded people and civilians trapped in the fighting, which erupted overnight and continued into Saturday evening.

In an updated death toll, the health ministry said 140 people had been wounded while 64 families had to be evacuated from areas around the fighting. It said hospitals and medical centres in the capital were shelled, and ambulance teams were barred from evacuating civilians, in acts that “amount to war crimes”.

Al Jazeera’s Malik Traina reported a cautious calm in Tripoli on Saturday evening. “Things have calmed down since the fighting began. But people here still fear that Libya may be on the verge of a full-scale conflict,” he said from the Libyan capital.The standoff for power in Libya has pitted the Tripoli-based Government of National Unity (GNU) under Abdul Hamid Dbeibah against a rival administration under Fathi Bashagha that is backed by the eastern-based parliament.

Dbeibah’s GNU, installed as part of a United Nations-led peace process following a previous round of violence, said the latest clashes in Tripoli were triggered by fighters aligned with Bashagha firing on a convoy in the capital while other pro-Bashagha units had massed outside the city.

It accused Bashagha of backing out of talks to resolve the crisis. 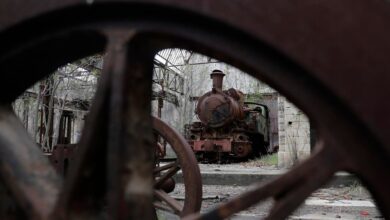